The Little Theatre Gateshead opened in 1943 and has a significant archive of documents and materials.

Here archivist Judith Carruthers will delve into this fascinating resource to display and discuss some of the more interesting items through regular blog posts. 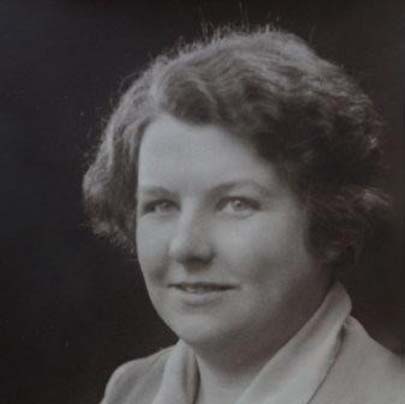 In the second look into our archive I am putting Ruth Dodds under the spotlight. Ruth was one of three sisters who founded The Little Theatre, Gateshead which is the home of the Progressive Players.

Ruth had been instrumental in establishing The Progressive Players in 1920 along with a group of about 8 people and in the early days they performed in The Westfield Hall just along the road from where the theatre now stands. I will go into the history of the PPs in another delve into the archive but for today I will stay with Ruth.

Ruth Dodds was born 8 May 1890 and died 1 April 1976. Ruth had a very interesting life – she worked for a while in her father’s bookbinding business. Indeed, on the deeds for the purchase of the land on which the theatre is built and number 3 Saltwell View she is the only one of the sisters who were listed as having an occupation – Hope and Sylvia were simply recorded as spinsters!

Ruth Dodds was the first woman Freeman of Gateshead

Ruth was an author, playwright and councillor and in 1965 she became the first woman freeman of Gateshead.

For us at The Little Theatre Ruth is known for many things, not only for founding the theatre. She kept scrapbooks about all aspects of theatre life and we have her to thank for the fact that our archive is as rich as it is as her books came to us on her death in 1976.

About 4 years ago an amazing book came into our possession. A lady arrived at the theatre clutching an unassuming brown book – but what treasure was inside! The whole book is about Ruth’s most famous play “The Pitman’s Pay”. There is only one real person in the play – Thomas Hepburn – and the play revolves around his struggle to get fair pay for the pitmen of the day. It would appear that Ruth sent copies of her play to people to read and many wrote back to her telling her their thoughts about her play. 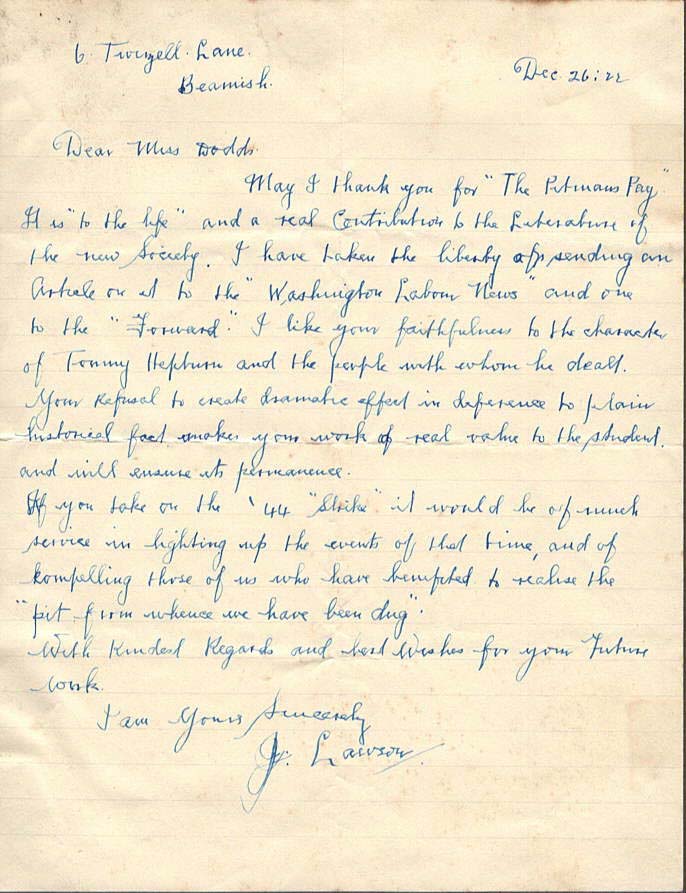 One such reply came from Jack Lawson MP (later Lord Lawson). Like Hepburn, Jack Lawson campaigned for fair pay for miners when he was MP so to have a letter from him in this book is quite remarkable.

Of course, Ruth wrote many other plays but it is The Pitman’s Pay that will be forever linked to her name. It was performed by the PPs in The Westfield Club and in many other places round the area. The book shows it was performed in Sheffield and we know it was performed in Cumbria too. Ruth was very active in the theatre. She took parts in plays and directed plays. She is in many programmes as Stage Manager – in fact it is hard to identify a role Ruth did not fill at some time. She was an active committee member too and her name often appears in the minutes of the Progressive Players from the very earliest days as the group was established. 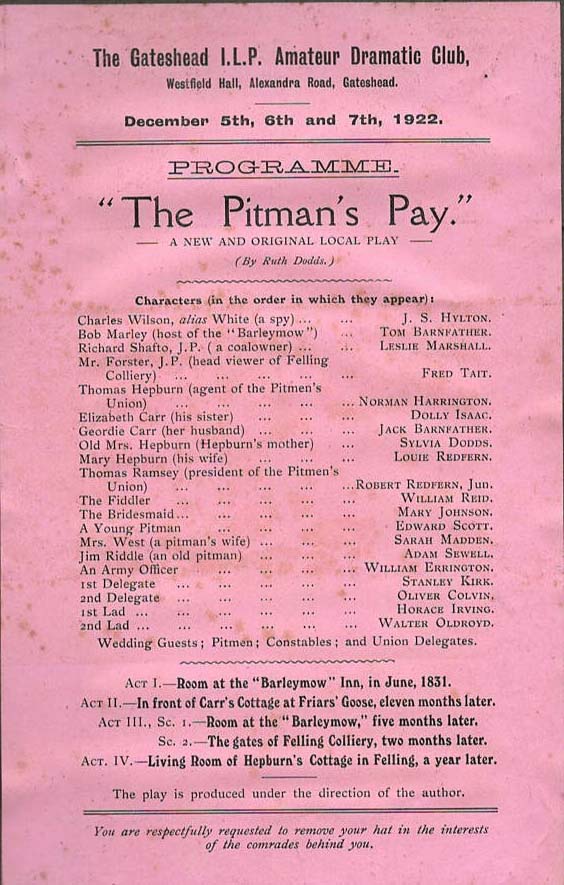 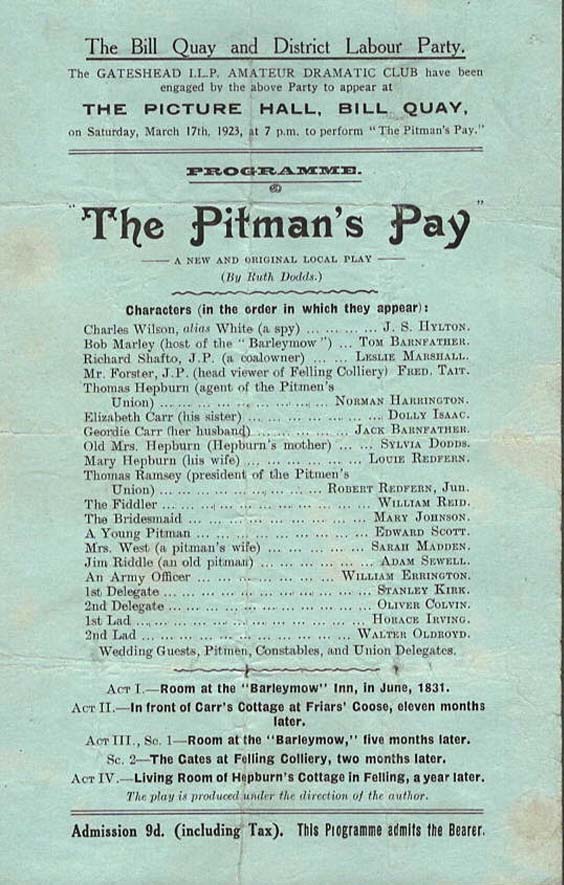 The photograph of the pink programme is one of the earliest programmes in our archive – and is from the premier performance of The Pitman’s Pay. The PPs later performed it in April 1926 and April 1937. The blue programme is from a performance in Bill Quay from 1923. Also in the book are “Notes on a reading of the Pitman’s Pay” given by the Sheffield Playgoers Society on April 26th 1922. They start by saying “The First Act opens rather slowly……”. They finish by saying “Altogether it was a most interesting and illuminating experience for us and I must add that many of the minor parts were excellently read….”. The notes were written by Ruth herself and are searingly honest – I suppose it is the only way to be able to develop the play by being able to reflect honestly on it.

The images below are contained in a scrapbook kept by Ruth Dodds. Ruth was one of three sisters (the others were Hope and Sylvia) who were the founders of the Little Theatre, Gateshead in 1943. 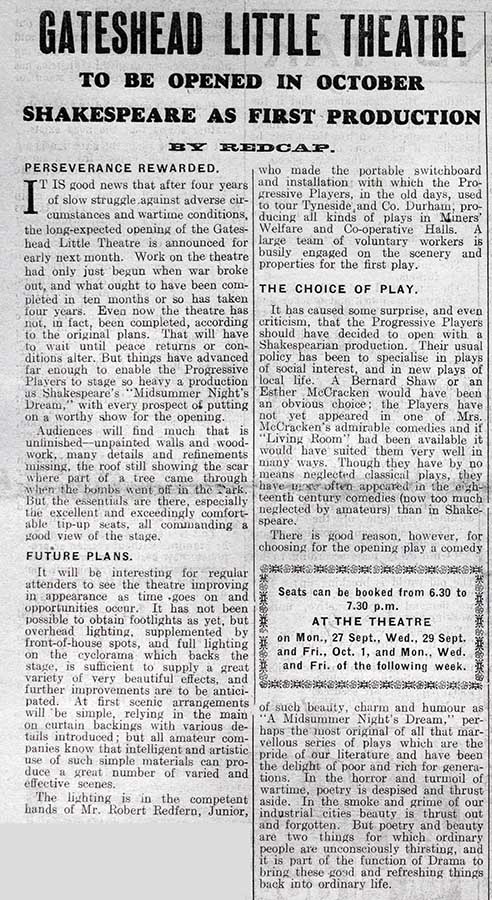 Ruth kept scrapbooks which came into our possession when she died in 1976. Her scrapbooks do not just chronicle the life of The Little Theatre but also of the Progressive Players.

The Little Theatre is the home of the PPs who are now 102 years old. Ruth also kept cuttings about theatre in other parts of the region and the development of amateur theatre round the country.

The first two images are from The Gateshead Herald of September 1943 just a month ahead of the first production in the new theatre. To the best of our knowledge ours is the only theatre in the country which was built and opened during the Second World War. 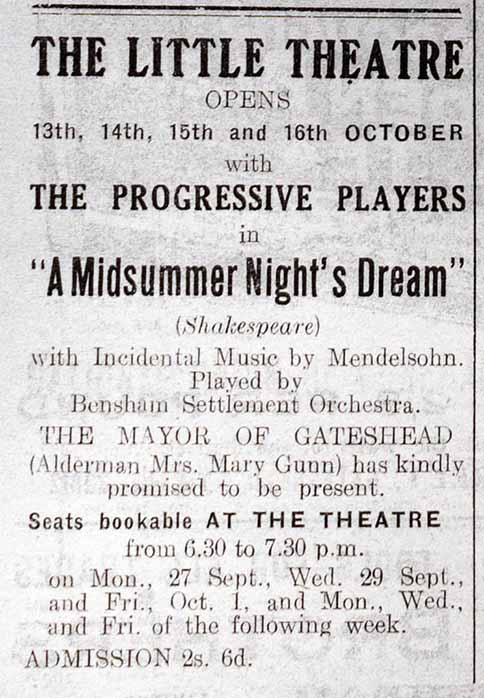 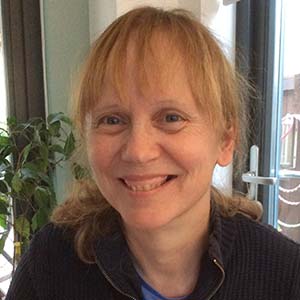